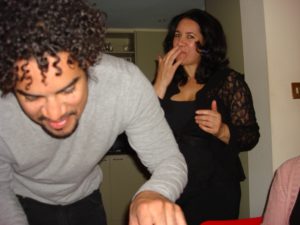 Happy Valentine’s Day to you! And Happy Birthday to me, the Nomad Chef! It has been 7 years since we started the secret restaurant/supper club, the Nomad Chef, now known as one of the oldest supper clubs in London.

It was 8 1/2 years ago that my son Shaka died. He was my inspiration for the Nomad Chef. He was my whole family, my only child, my everything… and he was the first Nomad Chef. He used that name when he was a private chef in London, cooking – maybe his favorite thing in the word to do besides eating. He did so many things well, but I think he was particularly inspired when he was cooking. He would call me from LA or Spain or somewhere he was living when I was in London or France or somewhere where I was living, to tell me about a dream he had where he tried sage and orange in a recipe… or some other foodie thing that didn’t require a hello. He launched in to talking about about food as if we had hung up the phone from each other 2 minutes ago. We talked every day, sometimes several times a day… about food, books, politics, everything and anything. But I was a single mom and didn’t play action figures with him. I was always in a rush to and from work, helping with homework in the car or over the dinner table. We camped for vacations, took road trips or stayed in 5 star hotels in cities where we would sample the nearby restaurants. Whatever we did food was at the center of it. I asked him to go running with me once in New York where he was living once. He burst out laughing, “you can’t keep up with me mom.” But he never laughed when we were in the kitchen. Once I must have taught him to cook but I barely remember it as he was doing it from the time he could reach the stove from a little stool. And then somehow he became the better cook, the real chef, and I became his sous chef at big dinner parties we had together in many different houses, kitchens and countries.

There is nothing that can fill the hole in my heart, the place where we were one. I will never again be my full self because half of me is gone. But when I cook I feel his presence. It is in the spices, it is in the cookbooks that still have his yellow post-it notes, it is in the memories of all of the food we cooked and ate together. I don’t know where he is, if there is any part of him that remains. I look for evidence of his presence in signs, like today when I went out for a fast walk and somehow my phone started playing music when spotify was closed. I never did figure out where the music was coming from so I launched spotify and let it pick up where the other music had been. I don’t know anything any more.

But I am grateful that I was able to cook myself through the darkness of losing my boy. I am grateful to all of you who came to eat with me at the Nomad Chef, that my son passed me the baton somehow and that I was able to pick it up and keep on cooking. I am grateful for the new family I created out of complete strangers, the thousands of you who have come to my Nomad Chef dinners here at my house in Holland Park, or in cities like Tiburon or Beverly Hills or Vienna, or art galleries or studios. I have made new friends because of these dinners. I don’t know what I would have done without the Nomad Chef world I have inhabited. Thank you Susanna for doing the first few dinners with me, for encouraging me.

I wanted to have a last Valentine dinner here in Holland Park tonight, but I’m too busy working.  I’m grateful to the Nomad Chef and my dinners for helping me get up off the couch in the early years of grief. I couldn’t leave the house but found I could cook! I wish you were all here with me tonight, like we were 7 years ago. But next time you come to the Nomad Chef it will be in a new house, probably in London. For the next few months I’ll be living in Italy cooking for some new strangers I have yet to meet. I’ll be back. Or maybe you’ll come see me down there.

You are my Valentine, all of you who have followed and dined with me and boyfriend Bruno at the Nomad Chef. Feel my love tonight. I wouldn’t be here without you!

(another sign: I decided to upload some photos of me and my boy, and then some photos of past dinners, and I went to browse photos and the folder that appeared on its own was called “film trailer photos,” all the photos I used in the film I made about my journey of cooking my way through the darkness… How did the computer know what to look for, to direct me to photos of my son? My Valentine must have stopped in for a visit today, knowing that my heart could use a little filling….)

The Nomad Chef is a popup and secret restaurant based in Sonoma California (formerly Notting Hill in London) where an ever changing group of adventurous, interesting, eclectic food lovers meet to eat food from all over the world, and share stories and artifacts of their lives… in the true Nomad tradition. The Nomad Chef Popup creates these dining experiences wherever she fancies… so she could be coming to a place near you!

This website uses cookies to improve your experience while you navigate through the website. Out of these, the cookies that are categorized as necessary are stored on your browser as they are essential for the working of basic functionalities of the website. We also use third-party cookies that help us analyze and understand how you use this website. These cookies will be stored in your browser only with your consent. You also have the option to opt-out of these cookies. But opting out of some of these cookies may affect your browsing experience.
Necessary Always Enabled
Necessary cookies are absolutely essential for the website to function properly. This category only includes cookies that ensures basic functionalities and security features of the website. These cookies do not store any personal information.
Non-necessary
Any cookies that may not be particularly necessary for the website to function and is used specifically to collect user personal data via analytics, ads, other embedded contents are termed as non-necessary cookies. It is mandatory to procure user consent prior to running these cookies on your website.
SAVE & ACCEPT